Hydro-mechanical couplings in geomechanics can be hard to solve for numerically at the micro-scale, where the flow needs to be resolved explicitly in the pore space. One of the main reasons for this difficulty is that the most common description for mechanical problems is the Lagrangian formulation whereas the Eulerian view is used for the flow problems. Coupling those two approaches remains a challenge, especially when trying to use an implicit solver in order to model the strong non-linear feedbacks between the fluid pressure and the rock that occurs during hydro-fracking for example.

We present a framework that allows to solve implicitly hydro-mechanical problems on CT-scans, starting with a process to retrieve 3D meshes reconstructed from a stack of segmented 2D CT-scan images, on which a simulator is used.

That simulator is based on REDBACK, an open-source FEM platform that implements a finite strain visco-elastoplastic mechanical simulator.

Our contribution consists in the development of an Eulerian-Lagrangian formulation to couple a fluid flow solver to REDBACK, either in a tightly-coupled or sequential manner. The implementation accounts for mesh adaptivity in the pore space where the Eulerian flow problem is solved following the hydro-mechanical deformation of the fluid-rock interface.

This framework opens the way for a better understanding of the fluid-rock interaction at the micro-scale that is particularly necessary in the context of petroleum engineering when studying fractured reservoir such as coalbed methane ones. 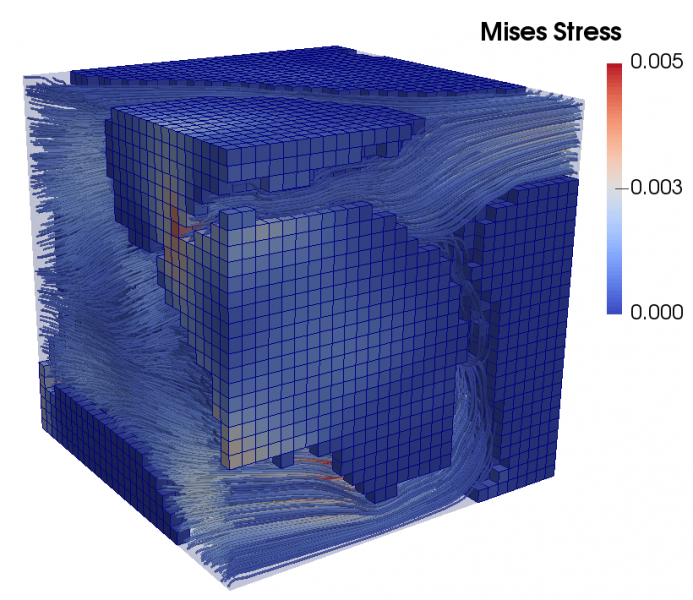 Chemo-mechanical Modelling of Cemented Soils, from the Microscale to the Volume Element (2016)